Start typing and press
Enter to search
Skip to content

I have a confession to make.  I completely, absolutely, unconditionally am in love with vanilla.  Shhh…Don’t tell my husband.  I dream of vanilla, and all it’s passionate yumminess. The organic, rich, calming mellow smoothness of its aroma beckon me.  Let me bathe in vanilla, let me be surrounded all my days by vanilla. Oh, an ode to vanilla…. The exotic fruit of orchid.  Really, it doesn’t get much more romantic than this, does it?

All silliness aside, I really do love vanilla.

A little Love (history) of the Vanilla Bean

Historically vanilla is native to Mexico.  It originated from the gulf coast area near present day Vera Cruz.  The name vanilla comes from the spanish word, “Vainilla” meaning “little pod”.  It is the fruit of the tropical orchid plant vanilla planifolia.  The ancient Totonoca Indians were the original keepers of vanilla.  It was revered in their culture, and its story is in their mythology.  The vanilla orchid bloomed and grew up  from the unrequited love of two star crossed lovers, and their untimely demise.  Very romantic, yet tragic.  Shakespeare anyone?  From the Tonotocas the vanilla bean was given as offering to the Aztec kings, who by their commanding nature seized the vanilla, plant and all, from them.  This is how the vanilla  bean came into the highlands of Central Mexico.  Cortez was responsible for bringing vanilla to the rest of the world.  Thank you for your plunder, the world would not quite be the same without it, or at least our desserts!  After his conquest of the Aztecs the vanilla bean was amongst other treasures brought back to Spain by Cortez.  It was combined with cacao to create an exotic drink enjoyed only by nobility and the excessively wealthy.  England’s relationship with Spain in the 1600’s brought the vanilla bean into Europe.  The apothecary to Queen Elisabeth I is responsible for uncovering the vanilla bean’s potential as a flavoring to other things other than the cacao drink.  It is from this time that we get the modern-day uses and applications of vanilla.  Mexico remained vanilla’s country of origin until the mid-19th century.  In 1819 French entrepreneurs shipped the vanilla bean to the islands of Reunion and Mauritius with hope of cultivating vanilla there.  They were unsuccessful in harvesting vanilla beans from their plants for many years.  They grew but would not bear fruit.  Unbeknownst to the french cultivators was the little pollinator, the Melipone bee, who is native to the vanilla regions of Mexico.  Eventually, it took the ingenuity of a child, twelve-year-old slave, Edmond Albius, who discovered how to effectively hand-pollinate the plants.  It is from here that the Bourbon vanilla bean was born.  The island Reunion was known as, Ile de Bourbon.  By 1898 the French had shipped the vanilla bean to Madagascar, and the plantations of all three islands made up 80 percent of the world’s vanilla production.  Today we can source vanilla beans from five main regions.  These are the Madagascar Bourbon vanilla beans that come from the three main islands, and are still considered to be the highest quality vanilla bean available with unmatchable aroma, described as having a creamy, sweet, smooth, mellow flavor.  Each region’s vanilla beans have qualities unique to the region.  Indonesia is the world’s second largest producer of vanilla beans with flavors said to be astringent, woody, and phenolic.  Together Madagascar vanilla beans and Indonesian vanilla beans make up 90 percent of the world’s production of the crop.  Mexico still produces vanilla, as you well know if you have ever been there.  I was lucky enough to visit the Riviera Maya region last fall, one of the vanilla regions in Mexico.  Upon our adventures there we stopped at a little roadside store that not only sold vanilla, but also produced the extract right there.  It was a unique experience to meet the family who produced it.  They also distilled Tequila, but that is a story for another day.  Mexico’s vanilla is said to have creamy, sweet, smooth and spicy notes.  Tahiti is also another producer of the vanilla bean.  Tahiti’s vanilla is grown from a different genus of orchid plant and is said to be flowery, fruity, anisic, and smooth.  India is the world’s newest producer of vanilla beans.  They have began expanding their production in recent years, from 2007 and on they continue to produce more, and more vanilla beans to add to the world’s commerce.  So there you have it folks, a brief yet lovely history of the vanilla bean, a story woven with tales of star-crossed lovers, unrequited love, kings, queens, conquistadors, and slavery, a rich passionate history not unlike the aromatic bean itself.

Making vanilla extract is quick and easy, kinda.  Getting it prepared is the quick and easy part, waiting the weeks for it to be fully developed requires patience and forethought.  It takes a very bare minimum of three weeks to extract.  I think that’s kinda pushing it, but the recipes for making vanilla extract are as varied as its history.  Some recipes say that the extract is not fully developed for more than six months, so you may need to plan ahead.  Vanilla extract makes lovely homemade Christmas gifts, you may want to start thinking about your giving for next year.  It will be soon time to start your extract if you would like it to be ready for next Christmas.  I did not plan very well, I have run out of vanilla extract in my kitchen.  AAaaagh!!!!!!  Run screaming from the kitchen cabinets, tearing at your hair!!!!!!  I thought I had one more bottle of mexican vanilla stashed away somewhere, but sadly, I have not found it.  I guess I used it.  HUGE SIGH….. so, I will be tapping into my vanilla extract after 3-4 weeks, just because I tend to like to push the boundaries of my luck.  Just kidding, anyway, back to the process.  You will need to source some whole organic vanilla beans.  You will get a better deal purchasing these in bulk if you can.  Check with a friend or two and see if they would like to split a quarter, half or full pound.  Depending upon your vanilla bean obsession, if you are anything like me, go for the full pound.  There are cakes custards, cookies, and all sorts of lovely, dreamy desserts out there crying out to you, “Use Real Vanilla…..not imitation!”  Trust me, you will be so glad you did.  Your family will thank you, neighbors will be clamoring at the door to see what the beautiful aroma is that is wafting from your kitchen…..

There are many online sites that sell organic vanilla beans, you just also want to be sure they are fair trade.  That way the farmers/harvesters are getting the fair dollar amount in trade for their work of growing and harvest.  The process of cultivating and producing vanilla beans is very labor intensive.  The vanilla plant is still hand-pollinated.  The drying process is very particular, and intensive, so you want to be sure that those doing the work for you are paid fairly for their efforts. 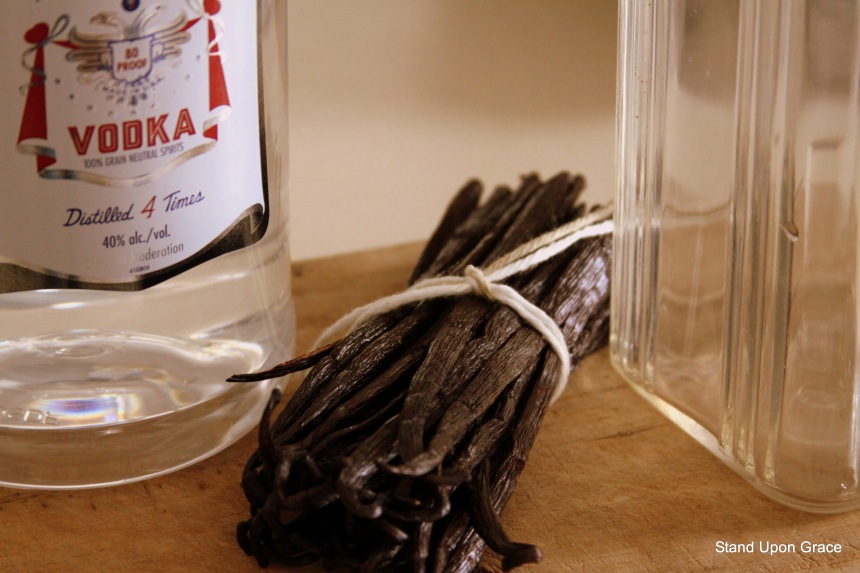 The only other ingredient you will need to make your vanilla extract is alcohol.  I have chosen bottom shelf vodka.  Yes, I am proud of that, kinda.  Well, actually, I chose second to the bottom shelf.  I had every intention of buying the cheapest, but I just couldn’t bring myself to do it, after seeing the brand.  I did need to keep my last shred of dignity.  Just kidding.  I chose to pay slightly more, less than one dollar, for a local, Minnesota distillery.  My budget says go low, since I am making a large quantity, and also making tinctures.  Choose what your budget allows, organic, top shelf is always nice, however not always practical on the homestead.  Some choose to use bourbon or rum to develop a richer flavored extract, but I am looking for the vanilla flavor to come through, and not be colored by its extractor.  I would like to experiment sometime with other flavors of alcohol just because I think it would be fun, and bourbon sounds much more romantic, but…..here I go again, I must no longer digress.  So bring on the vodka.

We will be making approx. one quart of vanilla extract.  Gather your quart jar, or you may choose just to plop the spliced vanilla beans into the vodka bottle, it’s totally up to you.  I am using one of Grandma Nellie’s (my husband’s grandma), antique art deco styled quart jars.  I love these jars, and since I use and love my vanilla often, I want it in a jar that I love just as much.  Whatever you may choose to house your vanilla extract, just be sure that it is tall enough that you can completely cover your beans with alcohol.  A regular quart jar is not quite tall enough, so you may need to cut your beans to fit.  Grandma Nellie’s pretty jar is just a bit taller than a regular mason jar.

Choose 10-12 lovely vanilla beans to extract.  The amount varies greatly in many recipes, so I have chosen the middle of the road, you may use more, you may use less.  You will then need to slice your vanilla beans open lengthwise.  Use either a kitchen shear, or a sharp knife.  Slice it from one tip to the other exposing the seeds.  Place the freshly sliced vanilla beans into your jar.

While you are slicing open the vanilla beans you may gently heat the vodka.  This step is not necessary, but I am choosing to do it, in hopes of speeding along the extraction process a bit.  Do not boil the vodka, heat to very warm, about 100 degrees.  Pour over the sliced vanilla beans in your glass jar.

Please be sure to spill your vodka all over the kitchen counter like me. 🙂

And because you have spilled so much, you must now top off your jar with unwarmed vodka.  But do not fear, you have just completely disinfected the countertops, surrounding cabinets, and floor.  Nice job. 🙂

Place lid on jar, and gently shake.  This will loosen the seeds from the pods.  You will see them floating in the jar like the picture above.  Let cool, and place into a dark cupboard for several weeks.  Shake at least weekly, I like to shake it up every day or so.  In a few weeks you will be LOVING your homemade vanilla extract. It should be dark brown, and very aromatic when fully developed.

Knowing Woman, lover, friend. Moon child, Mother, healer, midwife, servant to both life and death; offering myself the opportunity for rebirth. And so when I forget, all I need do is look inward, offer my open heart and hands as I remember that I belong, a wanted granddaughter of the moon, a needed woman, a worthy woman, a called to service woman, asked to step into my True Self, honor my truth, my lineage, my courage, my heart, remembering fully who I am.

Knowing Woman, lover, friend. Moon child, Mother, healer, midwife, servant to both life and death; offering myself the opportunity for rebirth. And so when I forget, all I need do is look inward, offer my open heart and hands as I remember that I belong, a wanted granddaughter of the moon, a needed woman, a worthy woman, a called to service woman, asked to step into my True Self, honor my truth, my lineage, my courage, my heart, remembering fully who I am.